In my recent Flasher Magazine interview I talked about how much I dislike the “advanced” classes in the Flex SDK that were shipped with Flex 3, namely the AdvancedDataGrid, the OLAPDataGrid, and the grouping and hierarchical collection classes. I also said that I thought that all the list-based controls (DataGrid, Tree, List, etc) were too bloated and slow and that they should all be rewritten from scratch. I realized that that sounds a bit harsh, so I wanted to try to back up those statements with some code metrics.

I’ve put together a spreadsheet that includes each class in the Flex framework, including charting and the advanced data visualization package. This shows the number of lines of code in each file, breaking down the total number of blank lines, comment lines, and actual code lines. I’ve colored the rows to indicate if the class belongs to the advanced data visualization package of Flex 3 (yellow), the charting framework (blue), the AIR SDK (red), or the open source Flex SDK (white).

Here are the top 20 classes, ordered by actual lines of code (not counting comments and whitespace): 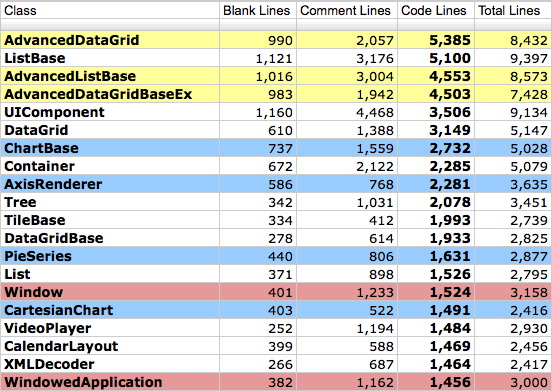 To get these numbers, I used a free program called cloc to analyze the source code. Cloc is a perl script that analyzes a bunch of different languages, including ActionScript.

For the full list, check out the spreadsheet. This is for version 3.0.0 of the Flex SDK, it does not include anything released in SDK versions 3.0.2 or 3.2 or any of the new Flex 4 classes.

That means that the entire codebase for the AdvancedDataGrid is 15,605 lines of code (26,517 if you include comments and whitespace). That’s 7% of the entire Flex codebase in those 4 classes. Note that this is not including ScrollControlBase or UIComponent, only the new classes in Flex 3. Also note that AdvancedDataGrid doesn’t inherit from ListBase or DataGrid at all, and ListBase is the second largest class in the entire framework.

So this means that when I run into a bug in the AdvancedDataGrid (which has happened a lot), I’ve got about 30,000 lines of code to wade through to try to debug my problem. No thank you.

The other two out of the top five are ListBase (which is why I said the entirety of the list classes is too big) and UIComponent (which I think is understandable, and I haven’t run into too many problems that have root causes in UIComponent, unlike ListBase which continues to be a big headache for me). Then number 6 on the list is DataGrid (oh, but don’t forget about #12 on the list, DataGridBase). If you group all list-based classes together (meaning the advanced classes and the original list/datagrid/tree classes), you’ve got 9 out of the top 20.

Code quality
This post is only about raw numbers. There’s an entirely different topic of code quality that I can write post after post about when it comes to the quality of the AdvancedDataGrid (and related classes). They use noticeably different coding conventions, they deviate dramatically from the best practices employed by the other components, and they are plagued by performance problems. But that discussion is for another post. For now I just wanted to point out the shear massive volume of code that you’re using when you use these classes.

Am I being too harsh?
Some would argue that the classes have to be big, given that they do so much. After all, it is called the AdvancedDataGrid, it’s doing crazy advanced stuff. I call bullshit on that argument. In my opinion, I just don’t think there’s an excuse for such massive classes. They make developers lives miserable when trying to debug, but I also think it is indicative of a sloppy coding style. The mentality sort of seems to be “throw more code at the problem until you get it to work.” Check out the expandItem method of AdvancedDataGrid. It’s 445 lines long – this single method is longer than 80% of all the other Flex classes in the framework (yes, I checked how many classes are under 445 total lines). That method even includes a spectacular commented out block of code with this comment:

// Dont know why this is done
// So, commenting it and using the rowHeight instead

Awesome. I guess as long as it passes the unit tests go ahead and ship it 😛