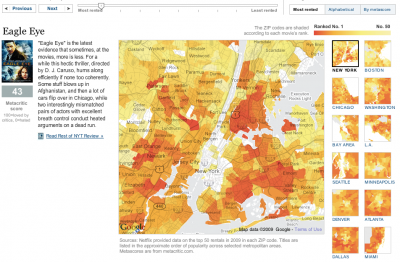 Standard
UPDATE: Feb 26, 2008
I have updated the CoverFlow library a bit and added support for adding children without explicitly setting the width and height of the children (ie using the normal Flex auto-sizing validation stuff). Grab the latest source code here.

Here’s a Flex component (with source) that does that sweet looking CoverFlow thing (you know, the iTunes/iPhone thing to show cover art). It’s a Flex component, so you can drop it into any Flex app. Just like Lee Brimelow opened the floodgates for a barrage of 3D carousel effects, I hope to see the CoverFlow effect used everywhere. Especially in places where it makes no sense to have this effect whatsoever. Go forth and overuse it and abuse it.

Example
I’ll go ahead and drop an example right away so you don’t have to read the rest of this to get the idea:

So what is this component?
It’s CoverFlow, duh. It’s a way of viewing stuff and scrolling through a list horizontally. It’s similar to Ely Greenfield’s DisplayShelf component (except this one does it the right way :P), and it’s just like what the guys at Blitz did too (in fact, quite similar since they’re using PV3D and Tweener too). Basically you have a bunch of things (ie cover art images) and you want to show them in this eye-candy extreme way.

How it was done
So this is a Flex component, and it extends ViewStack. There’s an obvious question as to why I made it dependent on the Flex framework and not just straight in AS3 without Flex dependencies. The answer is that it saved me time (and by that I mean I wouldn’t have done it otherwise). By using the ViewStack component as my base I don’t have to deal with all the child management crap. I get all the addChild, removeChild, the use of selectedIndex and selectedChild, and the use of the component in MXML right out of the gate. I’m lazy, so extending ViewStack was the obvious choice.

The component uses two open source libraries: PaperVision 3D and Tweener. Basically when a child is added to the ViewStack the component create a 3D Plane that represents that child. If the reflection is turned on then it creates two 3D Planes for each child, and the reflection Plane is flipped and placed below the first Plane. Yes, this means that showing the reflection doubles the number of polygons PaperVision is rendering. There are other approaches for doing reflection, but this one was easiest for me. Then we use Tweener to lay out the children and tada, we got a nice looking CoverFlow component.

The only sneaky thing that’s done is that we take advantage of the ViewStack control to keep interactivity on the Planes. We do this without using any of the interactive material stuff in PaperVision. Why? Because that stuff makes your app slow as balls. And besides, in this case, the user is only going to interact with a Plane when it is facing directly straight towards the screen. So all we do is wait until the plane is directly facing the user, then we swap in the real child of the ViewStack in its place. This way we get full interactivity, it’s invisible to the user, and we don’t have to slow our app down by using the PV3D interactivity stuff.

Source Code and Some Notes
The source code for the flex controls example in the list above is available here. That gives you the source code for the CoverFlow component. In that source code package I’ve included the PaperVision SWC and the Tweener SWC. I included those to make sure that people could download the code and test it out, but I encourage you to go get the source code of both of those libraries and compile them yourself. It’s good to know how to do that and that way you know you have the latest versions. A note about PaperVision: I used the Phunky branch of the project, but I don’t think I’m using anything that wouldn’t compile against the 1.5 release, but just in case, that’s the deal.

Sweet, I better see this effect all over the place. im in ur coverz, doin’ ur flow.