The next 360|Flex conference is coming up in March in San Jose. I got to thinking about my history with 360|Flex and wanted to reflect on how important the conference has been for me. This post is about the very first 360|Flex conference that was in March 2007. It’s self-indulgent, but I hope it doesn’t come off as egotistical. My goal is to explain my personal experience and my path, not to brag about how cool I am.

I attended the first 360|Flex conference in San Jose simply as an attendee. I barely knew anyone (at least personally) in the Flex world. I had been attending the Flex user group meetings in San Francisco for just a bit before this conference and so I had met a few people very briefly like Tom Ortega (conference organizer) and Ted Patrick (Adobe evangelist). I had been blogging for literally only 3 months. I was still very inexperienced (even if I tried to mask that) and I wasn’t at all confident in myself (I really tried to mask that).

The night before the first keynote of 360|Flex I got an email from Mark Anders from Adobe (who I had never met) telling me he was going to be showing a demo app of mine during the keynote. In the email he said:

“Make sure you attend the keynote, because I’m going to feature your RSS reader in it as a demo!  I hope that’s ok! 🙂  I’ll also be asking you to stand up and take a bow, so make sure you look great!  See you tomorrow!” 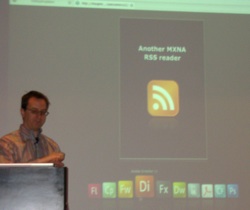 Hope it’s OK? Fuck yeah, it’s awesome. Completely unexpected. I had butterflies in my stomach all night until the next morning, I was like a little schoolgirl. I got there early the next day, I wore a black sweater that I thought looked kind of professional in a dorky tech way, sort of Steve Jobs inspired. I realize now that I probably looked like a tool, but hey, it worked alright for me. Keynote came, the demo was shown, people seemed impressed and clapped and I did a little stand up wave kind of awkward thing. Super nervous, totally weird, but people saw my face. And after the keynote I met Mark and chatted with him and some fellow Adobe employees a bit (at the time I was seriously considering trying to get a job at Adobe, so I was sucking up pretty big time I think).

On the second day of the conference Ted Patrick approached me and asked if I could put together a demo of FlexLib components to be shown at the keynote on the last day of the conference. I think this was in the afternoon and he was going to show it the next morning. I proceeded to go sit in the back of the last session of the day and crank out a little demo explorer app to showcase some of the components. To spice things up I threw in an extra water eyecandy effect that I was in the middle or working on. I threw the demo together fairly quickly and got it over to him for the next day. The demo was just a small part of his keynote, but during it he did get my name in there and point me out in the crowd, and people seemed to dig the water effect nonsense 🙂

So with a whole lot of luck I had managed to get my name mentioned in both the keynotes of 360|Flex. I’m grateful for these opportunities, they felt like they came out of nowhere and suddenly people were coming up to me to talk (as opposed to me sheepishly approaching people in the awkward tech-dork way).

I remember sitting in the back of some session (can’t for the life of me remember anything about the session) and I happened to be sitting next to Tom Link and Brett Cortese from Universal Mind. I wasn’t at all tapped into the Flex consulting scene at that time, so I didn’t know the name Universal Mind. But I was sitting there in the back and Tom was reviewing some app that UM was working on. It was a sort of business dashboard app that had a slick UI that let you customize various charts. I can’t remember the exact conversation, but I remember looking over his shoulder and being impressed with the app and chatting about it a bit. He mentioned Darron Schall’s name at some point. I had been collaborating with Darron a bit on FlexLib and so I got online and started asking him about UM. Turns out he had only good things to say (and he apparently said good things about me to UM as well). After 360|Flex I left Tom with one of my ridiculous business cards. We ended up getting in touch shortly after and following up and the rest is history. I just passed my two year anniversary working for UM and I’ve had a hell of a good time.

At the conference Ted Patrick introduced me to a guy from Yahoo. He was interested in hiring a Flex contractor for an internal project. If I recall correctly the basic plan was to have this Flex app that let Yahoo employees create different layouts and combinations of various Yahoo widgets, which would eventually turn into Yahoo web pages. It was sort of a prototyping tool for internal use. I had never done Flex consulting work before. I had never done any independent consulting whatsoever. I didn’t have the utmost confidence in my own abilities and I certainly didn’t feel comfortable asking for a lot of money. But I figured, fuck it, what’s the worst that can happen?

So with no prior consulting experience I quoted him $125 an hour. Pulled straight out of my ass. My logic was that I didn’t actually need the work yet (I was happily unemployed) but that if it came through and I was making over a hundred dollars an hour I’d would dive in head first (and be scared shitless in the process). I was far more scared of actually getting the gig than not, since then I’d have to actually be worth what I saw as such a ridiculous rate. I ended the email like this (parentheses are my thoughts, not in the actual email): “I’m happy to discuss the project further. I find the concept very interesting (I didn’t really), so even if I’m not involved in the development I’d be more than happy to give my opinions on the project (this was true, since I had no experience whatsoever I figured that any involvement would help me). Let me know how you want to proceed, and regardless let’s keep in touch about work that Yahoo is doing with Flex (having contacts inside companies like Yahoo can never hurt).” Send. And then I never even got a response. Ego bruised, but not badly.

This is funny because it’s a story I’ve never told Jesse (or anyone for that matter) and it showcases just how insecure I was at the time. I had been talking to Tom from UM about consulting and he had mentioned that Jesse Warden had been doing a bit of consulting for them as well, and that I should talk to him to see what UM was like. Jesse (who I had never met) was sitting against some wall working on a laptop and I walked over and said some awkward introduction like “Hey Jesse, it’s nice to meet you, I’m Doug McCune.” After being caught completely off guard with Jesse’s caffinated million-word-a-minute style of speech we got to talking a bit and then he said something like, “Where the hell did you come from? Like all the sudden here’s this Doug McCune guy coming out of nowhere making our computers blow up with this crazy fire and shit.” (I had recently released a fire effect demo). It’s funny how that interaction sticks so vividly in my mind. I probably laughed it off and said some kind of thanks, but inside I was beaming with pride. Jesse fucking Warden knew who I was and thought my shit was cool. That’s actually the exact moment that I knew that I was on some kind of path here, that this was actually going to work out.

This conference was huge for me

I had no expectations going into the conference, I figured I’d attend like I had attended various conferences before, sit in the back of sessions, take notes and write down links, and hopefully learn good material. I had no idea I’d get the kind of exposure in the keynotes that I ended up getting, or that I’d make the connections that I did. I ended up meeting Jesse, Deepa, Ben Stucki, Renaun Erickson, Mark Anders, Ely Greenfield, and countless other people. And these people that I met actually knew who I was. I couldn’t fucking believe it. My head was literally spinning at the end of it all.

6 thoughts on “Reflections on the first 360|Flex”