In this post I’m going to dive into details about the stats of the FlexCoders mailing list usage over the past 5 and a half years. It’s full of graphs of various fun statistics, like who’s most active on the list, when people post, and the overall traffic over time. It’s a bit of a trip down memory lane, and I apologize if I ramble, I like data and pretty pictures, and I have a soft spot in my heart for FlexCoders, so bear with me and hopefully for those of you on the mailing list it will be a fun trip.

I’ve been on the FlexCoders mailing for a few years now (my first post was back in September 2006). As the Flex community grew, the list grew, some would say it grew to unmanageable levels. It’s certainly a lot of mail, I currently have 22,100 unread flexcoders emails in GMail. At one point we even debated furiously whether the list should be split up into multiple more focused lists, or if the whole thing was going to die. Regardless of that outcome the flexcoders list remained as it has been for years. One thing did change though: Adobe replaced their official forum (which was literally God’s worst forum software) with a new one. And the Adobe employees definitely seemed to be pushing people there, which isn’t to say they stopped answering flexcoders questions, but the community was certainly now split between two lists.

I subscribe to both flexcoders and the Adobe Flex forums (which you can setup to receive emails from). I started noticing a trend. Take a look at this picture of my inbox (only flexcoders and Adobe forums emails) as of right now: 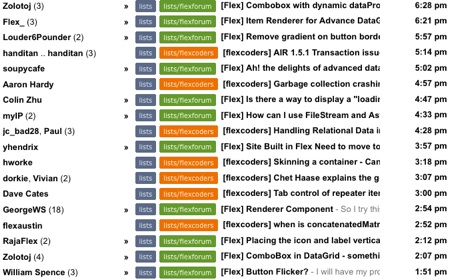 The orange label is used to tag the posts from flexcoders and the green label is posts from the Adobe forums. I started noticing that the number of posts from the forums were more than on flexcoders. That obviously made me wonder if the overall traffic on flexcoders was in decline. I’ve been inactive on the list for quite a while (been quiet for most of 2009). So I didn’t exactly have my finger on the pulse of flexcoders.

So I wanted to download the entire Yahoo group dataset to start playing with it. Turns out Yahoo doesn’t make this easy, but I found a sweet program called PG Offline that I used to pull down the entire list. It took me a few days to get all 148,826 messages (as of about 7pm tonight). But PG Offline worked incredibly well and I then had an Access database file with all the emails (it was about 1.5 gigs). I then used another program called MDB Converter to convert that to a text CSV file.

If you want to play with the data yourself you can download the CSV file (11 megs). It includes columns for the sender, date, and subject. I did not include the full-text of the emails, since that would make it a gig and a half.

I pulled the data into SpatialKey (which is what I work on for my day job) and started digging into the data. Here’s the report setup I created in SpatialKey to play around and filter down the data (click for a larger view): 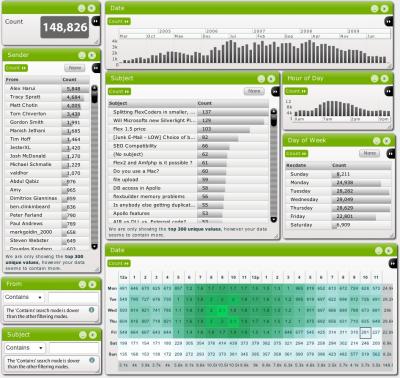 So we can start seeing the overall trend in the main timeline, which shows the rise and fall in traffic.

So there certainly has been a decline in traffic to the list. The most active month ever in the list’s history was March 2008 with 3,834 posts. And then it’s been a fairly steady decline since that peak.

Some other interesting high level stats are the hours of the most activity. This chart shows the number of posts by hour of day. Hour of day is Pacific time.

You can clearly see the work-day hours there. 8, 9, and 10am are the most active, and then it slows down as the work-day finishes up (earlier for east coast people), and then there’s another small bump around 9pm in the evening.

Anyone who reads FlexCoders knows that Alex Harui (from Adobe) is the king. Here are two charts showing the top 10 posters of all time and the top 10 from just 2009. 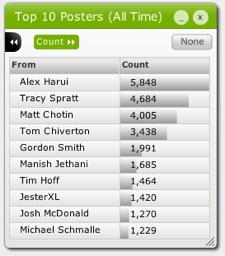 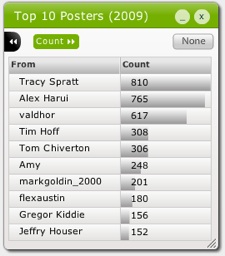 Alex certainly still holds the number one spot overall, but Tracy has him beat for this past year.

It’s also pretty interesting to look at how different individuals use flexcoders, and how their usage has changed. Here are just a few selected people that I was curious about:

Alex wasn’t always the king. He had a few messages back in 2005, but his heavy involvement on the list actually started relatively late, in March of 2007 (which is also when he started blogging coincidentally).

Tracy Spratt, on the other hand, has been on the list since its very beginning:

Matt Chotin (Flex product manager) has also been active since the list started:

Actually, Matt Chotin and Tracy Spratt are the only two people who have posted to the list at least once every single month since the very beginning (from April 2004 to now). They get the FlexCoders Lifetime Achievement Award!

Some people were around in the early days but then dropped out. Here’s Jesse Warden‘s activity:

Some people get sucked into the list fast and then fizzle out. Josh McDonald was the third most prolific poster of 2008, but then stopped posting as quickly as he started:

And some people stop posting when it’s no longer part of their job, like Roger Gonzalez who worked for Adobe and left in March 2007 (which was also the last time he posted to the list):

Ely Greenfield (Principal Architect at Adobe working on Flex 4) used to be fairly active back in 2006/2007, but hasn’t said a word in the past two years:

And what about me? I was fairly active on the list from about 2007 through the beginning of 2009, then pretty much radio silence:

And some people don’t live in the USA and post at completely different times. Here’s Tom Chiverton‘s (4th most prolific poster of all time) usage pattern by hour of day and day of week. It groups the posts by the combination of what day and what hour they occur on.

At first glance it looks like Tom emails the list in the middle of the night, until you realize that he lives in England 🙂

I’ve had a lot of fun drilling into the history of this list. It’s really cool what kinds of trends you can find (probably another post in more detail on that later).

Want to play with the data?

You can download the complete CSV file and use it if you want. I’d love to see people turn it into much more interesting visualizations. This dataset goes up until November 2 2009. Since it’s a bit of a pain to keep it updated I probably won’t update it very often, but if there is interest I might do so once a month or so.

All this data is public, you can see it all by going to the Yahoo group and searching. There are no email addresses in this data (unless perhaps if someone used their email address as their name as well). Any names in this data are there because the person knowingly emailed the public flexcoders email list. This CSV download is obviously a much easier format to work with all the data, and it can certainly be mined for interesting trends. I just ask that people play nice with the data. We’re a community, and this is data that represents our lives (or at least one small sliver of our lives) for the past 5 years.