This is the time of year when people are making their resolutions, mapping out their big life changes for the coming year, and thinking ahead about what the future holds. I’m not one for resolutions, never have been. But I like the idea of taking stock of where you stand and thinking about changes you want to make.

And so to usher in 2010 I’ve decided to make a change: I’m removing “Adobe Flex Developer” from the title of my blog. The title used to read . It will now read: Doug McCune – Data Visualization Engineer. Oooh, aaah.

This isn’t a change in anything other than my own mentality, but for me it is indeed significant. I’ll still be using largely the same tools, meaning I’ll be writing Flex applications and using ActionScript as my main language. I’m not changing jobs. My day-to-day work on Monday will be the same as my day-to-day work yesterday. This is a change in how I see myself, and most importantly how I see myself growing in the future.

Flex has been good to me, it provided a platform on which I could launch a career. Defining myself as a Flex Developer worked well and gave me enough room to grow. Within the small Flex community there were challenges, constantly new things to learn, and more than enough to keep me intellectually interested. The technology itself held my focus and through that focus I grew as a software developer.

But now that “Flex Developer” designation is a box that’s constricting rather than enabling. I gave a talk at 360|Flex in Indianapolis in which I talked about burning out. I explained that I had hit a point with the technology where the simply wasn’t enough left to keep me excited and passionate. As a side note, I love the fact that right on the first page of Google results for my name is an image of me standing in front of a slide that says “FUCK FLEX” 🙂 How fitting. 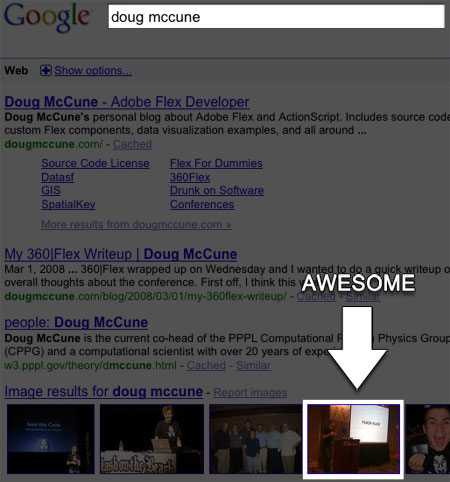 The work I’ve been doing on SpatialKey has developed my interest in the field of data visualization, which is a field with an amazingly rich history and a field I see rising in importance in the years ahead. Most importantly, it’s a field I don’t know much about. There is so much to learn, from new tools and languages (R, map-reduce, Processing) to historical visualization techniques (cartography alone has such an amazing history) to modern data never before available (the human genome is on Amazon AWS). The field as it is right now gets me pumped up, and it’s a field that will experience explosive growth in the coming decade.

So starting in 2010 I won’t be identifying myself as a Flex developer. Flex will still be the tool I choose to use for my work, but it isn’t part of my identity like it used to be. I’m a data visualization engineer. And I’m excited.