360|Flex wrapped up on Wednesday and I wanted to do a quick writeup of my overall thoughts about the conference. First off, I think this was the best Flex conference ever put on. That’s a bold statement because I haven’t been to some of the other Flex conferences, but I’m fairly confident it’s true. I’ve attended the previous two 360|Flex events and each time the conference just gets better and better.

The speakers are getting damn good
The Flex speaker roster has matured a bit, this conference marked the third 360 event that some of the speakers have done (this was only my second conference as a speaker). I think you can see very visible improvement in both the content and presentation skills of the speakers. There were two sessions I’m kicking myself for missing: Jun Heider’s presentation about memory management, and Michael Labriola’s presentation on what happens during the first few milliseconds of your application startup. Both speakers have posted their slides and material. Hearing the buzz around the conference, it sounded like those two presentations were two of the absolute highlights.

Here’s my theory on why those presentations were so good:

Reflection on my sessions

I had a really good time presenting at this conference. I apologize if I offended any of the sign language translators 🙂 (if you weren’t there let’s just say I had fun getting them to translate certain phrases). My main presentation was on using open source community projects and I’ve posted all the slides and sample code. I thought this session was fun, although I think I crammed a lot of stuff into the 80 minutes and didn’t have as much time as I would have liked for the kind of organic discussion that I find so fun. When I originally told Tom and John the idea for my session they suggested doing an all-day hand-on session on the topic. If I wasn’t so lazy I actually think this would be a really good all-day type of thing. Maybe in the future we can get enough speakers to tag team it, so nobody has to spend the whole day presenting.

The second session that I did, which was unplanned, was a session on building your personal brand. Juan Sanchez and I teamed up for this session and talked about our different approaches on branding and marketing yourself. This session was in place of Jesse Warden’s originally planned session that was on a similar topic (although Jesse planned on covering a lot more content about the business side of things). BTW, if you attended 360, Jesse’s original presentation PDF is on the USB stick, check it out in all of its 215-slide glory. As for me, I had about 8 slides I whipped up 20 minutes before the presentation. This session was a pretty awesome discussion, most of the people in the room contributed and talked about their experiences. Jeff Houser was there and talked about brand building from the perspective of a business-owner (ie not a crazy egocentric nutjob developer like myself). I think the topic of branding is hugely important, and I’d like to see this kind of content presented much more at these kinds of conferences.

I want videos again
This year the presentations at 360 weren’t recorded, and I’m really wishing they were so I could watch Jun’s, Michael’s, and a bunch of other sessions. Last year I didn’t watch the videos of anyone else’s sessions, primarily because the technical level of the content wasn’t quite there. Now I’m pissed because I know there’s some seriously good information in these presentations that I missed (and reading through the slides isn’t nearly the same). I vote for recording this stuff again, even if next time that means we each do it ghetto style and and just stick a crappy camera in the corner of the room.

I love you guys
This is the best developer community. I heard over and over again during the conference about how nice everyone is. There are no asshole prima donna speakers, everyone is approachable and friendly. That goes for the speakers, everyone from Adobe, and all the attendees. Everyone’s just authentically nice. The Flex community is going to grow dramatically over the next few years. Let’s try to keep this awesome small-community vibe that we got going on. This community vibe is why I love presenting at 360|Flex (and the main reason I don’t present at other larger conferences).

Thanks Tom and John! You guys rock. 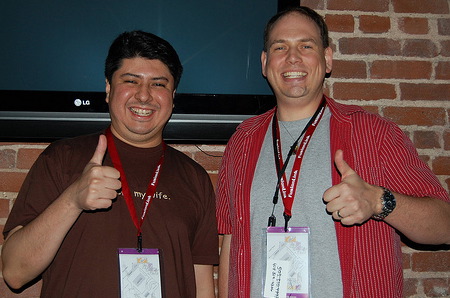 (photo by Terry May)