I was contacted by Justin Ouellette, the creator of Muxtape, who asked that I remove the download functionality from MuxMaster. I’m torn about this issue, on one hand Muxtape is a service based on technology that makes distributing MP3s extremely easy. Justin has chosen to hide this capability because he’s appropriately scared of the consequences of having Muxtape turn into a file-swapping website. But essentially Muxtape is a massive dropbox for MP3s. On the other hand, I really do like Muxtape, and I don’t really want to be the one partly responsible for getting the site shut down.

Note that this isn’t a decision about legality (not for the legality of MuxMaster anyway) and I wasn’t coerced or threatened or anything like that. Justin just sent me an email saying he liked the app (and is cool with people making apps like this) but that the download feature endangers Muxtape. I agree, although I still don’t know whether I should feel obligated to remove the download feature.

On a lighter note, Juan Sanchez whipped up a little icon for MuxMaster, which is now included in the latest version of the application. Pretty sweet huh? Thanks Juan!

If the above install link doesn’t work, do this:
Standard

MuxMaster is an open-source desktop player to browse, play, and download Muxtape mixes. It is an AIR application that lets you stream music from Muxtape, explore different mixes to find new music, and even download tracks and entire playlists to your computer with a single click.

UPDATE: After being contacted by the creator of Muxtape I have decided that it is in the best interest of the Muxtape service to remove the download functionality from MuxMaster. I was torn about this, but for now the downloading features are removed.
This movie requires Flash Player 9.

If the above install link doesn’t work, do this:

Here are a few screenshots: 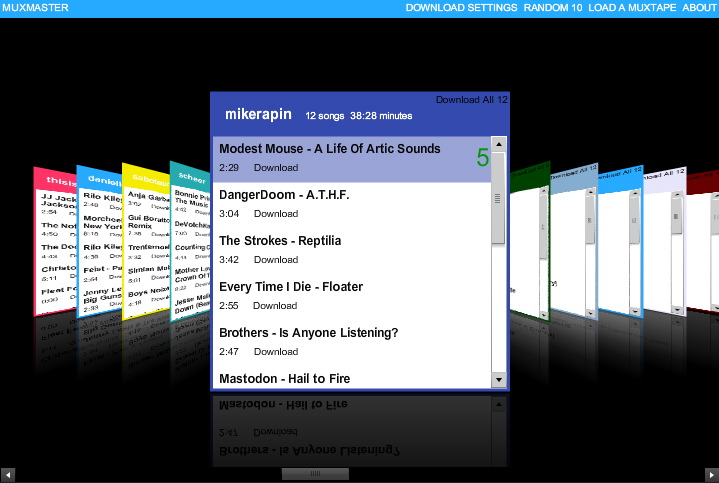 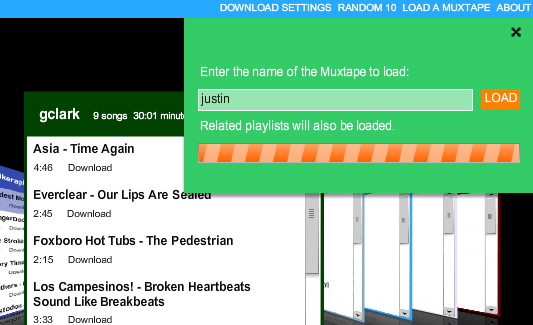 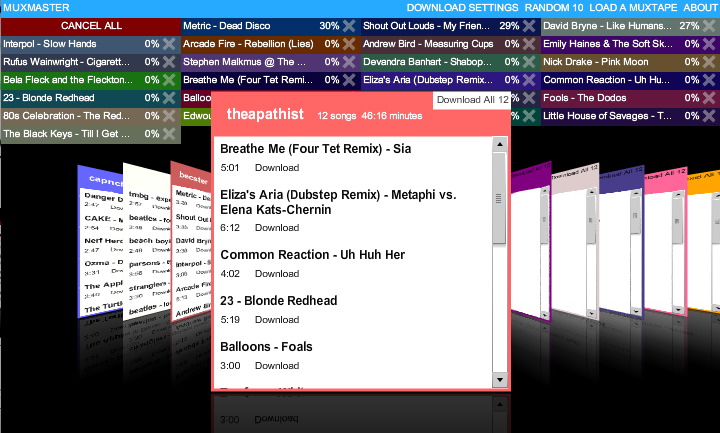 Why did I make this?
I like Muxtape. Like a lot of software/web guys, I saw the clean interface and the barren source code and was immediately impressed. I mean, the dude did a fantastic job. It was just so damn clean.

Then a few days ago people went ga-ga over this video of some dude showing muxtape mixes using the Coverflow visualization to browse through them. OK, so that’s cool, except it uses a Mac-only application called Fluid to basically add normal Mac desktop functionality to web apps. That shit got dugg like 750 times. Now I’m not saying it’s not cool, cause it is. But I figured I could probably whip up a Flex application pretty quickly using the Coverflow component I released before and get a real desktop application that anyone could download and use. Oh, and I thought it would be neat to add downloading functionality too.

So I threw MuxMaster together over the past 3 nights. I like to think of it as a testament to the badassness of Flex and the open-source Flex/Flash community. The fact that I can grab some open source stuff and throw this together in almost no time is pretty cool.

What kind of an application is this?
MuxMaster is an Adobe AIR application, built with Flex. That means it’s a desktop application that can run on Windows, Mac, Linux, whatever. Click the “Install Now” link above to install the app. You might need to go and download the AIR runtime first. Hopefully it’ll tell you that and do everything automagically.

The Muxtape API
Muxtape has no API. But the HTML code is so sleek and beautifully clean. Go look at the source code for the HTML pages on muxtape.com. It’s ridiculous how sparse it is. And of course it validates as valid XML. So what? Well, nice XHTML like that is just as good as the best XML API you can ask for. You want to get a listing of some random Muxtapes? Just load up the XHTML on the Muxtape home page and parse out the list of users. Using E4X you can get a list of users with this single expression: body.div.div.ul.li.a. It’s almost too easy. So then when you get a username you just load that user’s HTML page and you can easily parse the list of songs (body.div.ul.li) or related users (body.div.div.div.ul.li.a). There’s a little trickery involved to figure out exactly how to construct the URLs for the MP3s, but it’s pretty easy to figure out. After a little parsing you can get a list of MP3 URLs and the data about each song, like artist, track title, duration, etc.

UPDATE: After being contacted by the creator of Muxtape I have decided that it is in the best interest of the Muxtape service to remove the download functionality from MuxMaster. I was torn about this, but for now the downloading features are removed.

The thing about Muxtape is that all the songs are just MP3s stored on Amazon S3. If you know the URL you can download the file. The main Muxtape player doesn’t expose this functionality, but if you take a look at the files that the web-based player is loading you can just copy/paste the URL and load it into a web browser to save the file. So I just made that a bit easier. MuxMaster has a Download link for each song underneath the song name. One click and the song will download in the background (you can specify where you want songs to download to). Additionally, each playlist also has a Download All link, so with a single click you can download all the songs in the playlist. 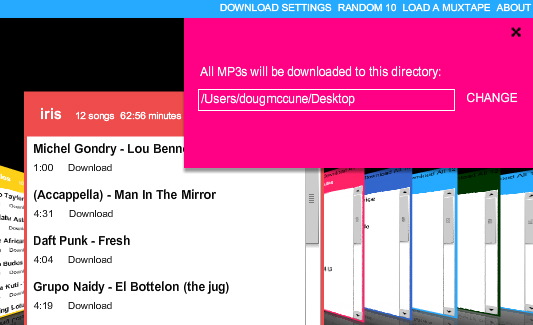 Is this bad?
There’s a whole ethical dilemma that we can spend forever discussing. Is this application against everything that Muxtape stands for (clean, simple, bare-bones UI)? Is adding download functionality quickening the shutdown of the service? Is this effectively taking a step toward destroying the service that I actually really enjoy using? Yeah, the answer to all those might be yes.

Yes, the excessive use of 3D and especially the over-used Coverflow visualization are exactly opposite to the perfectly clean design concept of Muxtape. The truth is, I hate Coverflow. But people gravitate toward it and seem to love it, so I figured it’d be fun to whip something up and see the response. And it was just so damn easy.

And yes, being able to download an entire mix with a single click may very well be a horrible thing for Muxtape as a whole. I assume the service is already on the radar of the lawyer-crazy music execs, and if it’s not now I assume it will be if it gets big enough. But the technology underneath the service was just so simple (I mean, really? just let people throw a bunch of MP3s up on Amazon S3?) that someone would have shown how to download all those songs soon enough. So I’ll definitely feel bad if this app has a negative effect on Muxtape, but come on, it’s something I whipped up in a few days, someone was bound to do it.

Source code
I’m releasing all the source code for the application. When you install the AIR application you can right click and select “View source” to see all the code. Or you can view the source here. It’s small (16 files, 898 total lines of code). And the code was influenced by the minimalist design of the Muxtap app itself, so I tried to keep things extremely tidy and clean.

I used a few open-source flex libraries. The most obvious one is the Coverflow Flex component that I created and released on my blog. That’s licensed under the MIT license, so you can take that component and add this type of Coverflow visualization to your Flex apps. The Coverflow visualization uses the Papervision 3D library, which is a 3D engine for Flash. It’s badass and free (MIT license). The other Flex library I used is FlexLib, which was used for the FlowBox container. That component can be seen when you download songs. It’s the container that lays out the little download rectangles. FlexLib is also licensed under the MIT license (is there a pattern forming?).

The source code for MuxMaster, like all code released on my blog, is also licensed under the MIT license, which you can read here. Basically you can do whatever you want with the code.

What’s next?
I don’t know if I’m going to do anything more with this application. The app does rely on the format of the HTML pages on Muxtape, so if the creator of Muxtape decides to try to break MuxMaster he probably can, and I’d have to update it to get it to work again. I might do updates like that to keep it working. If people have feature request I’d love to hear them, but I’d encourage other developers to take my source code and add the stuff that they want. If you have feedback shoot me a message using my contact form or leave comments here. I don’t have any big plans, this was fun to make.