This is another experiment in visualizing 24-hour cyclical data. My last post explored a method of linear representation (the Double Time Bar Chart). Linear representations have problems when it comes to showing the cyclical nature of time data (ie there is no start or end of a 24 hour cycle).

When trying to think of visual representations of never-ending cycles I was inspired by the infinity symbol. It’s a great symbol to show a continuous cycle, while at the same time being more visually interesting than a simple circle (fun fact: the infinity symbol dates back to 1655). The other iconography that came to mind when thinking about infinity is the hour glass. An hour glass not only represents time, but it also looks similar to a vertical infinity symbol.

My thought was that maybe I could combine the two to create a vertical infinity symbol that evokes the metaphor of an hour glass.

Back of the napkin

My original sketch of this concept was done on the back of a napkin. This is the first sketch, which shows how I was originally working with a horizontal infinity symbol. 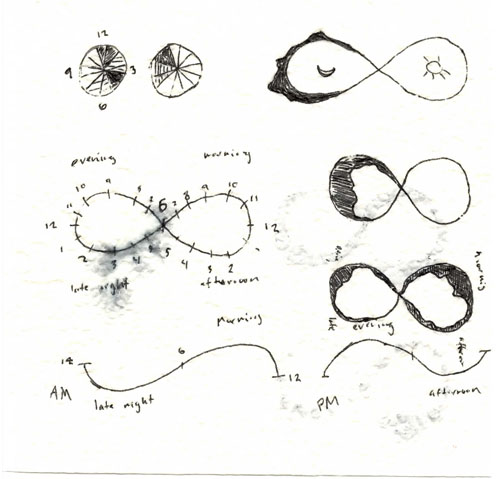 I experimented with a few different options for how to show the data using fills. One of the sketches (if turned vertically) looks like an hour glass filling up with water on the bottom, reminiscent of the Wikileaks logo. 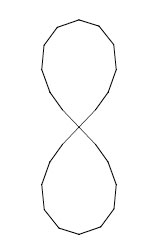 I mapped the hours of the day onto this form, with 12pm noon at the very top and the infinity symbol crossing itself at 6pm/6am. 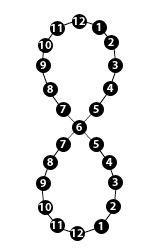 You follow the time by working your way around the infinity. If you start at the top of the symbol at noon, you would start moving around clockwise to 1pm, then 2pm, etc. You’ll reach the center at 6pm, at which point the symbol crosses itself and you then read it counter-clockwise around the bottom. 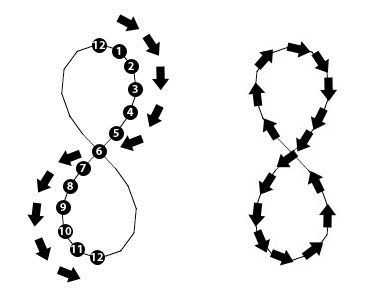 What you end up with is a way of dividing up the times of day into quadrants. The top-left quarter of the image is the morning, from 6am-12pm. Then the top-right is the afternoon, from 12pm-6pm. Then you have the evening in the botom left (6pm-midnight) and then late-night is in the bottom-right (12am-6am). These quarters match well with how I mentally categorize times of day. 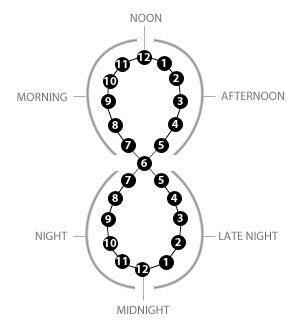 Because the form crosses over itself you can actually read the chart almost in a left-to-right way for both the day (top) and night (bottom).

The next step is to try to use this form to represent real data. Here’s an example that shows the distribution of driving under the influence arrests in San Francisco: 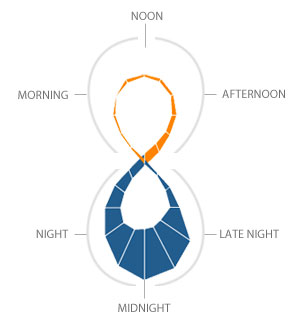 We can see that this particular crime is primarily a night-time activity that surges around midnight and starts falling off after about 2am. I’ve colored the range of 6am-6pm in orange to show day-time and the range of 6pm-6am in blue to indicate night-time.

For comparison here’s apartment burglary, which is mostly a day-time activity: 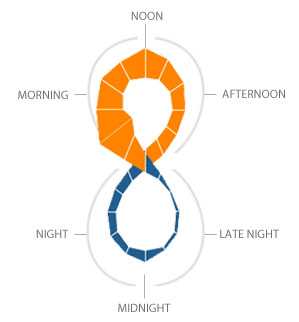 Once the viewer understands how to read the chart we can remove the labels and simply show the pattern. Here’s a comparison of a few night-time crimes: 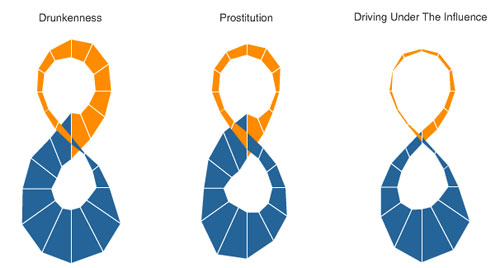 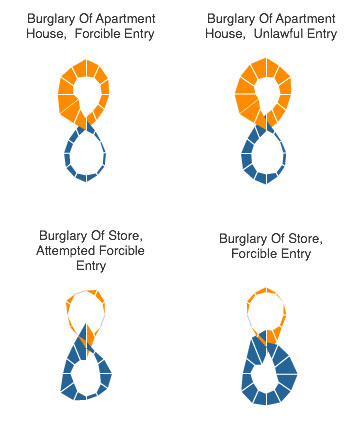 Here’s a final example of many different crime types represented side by side to try to see how this chart works for comparisons. 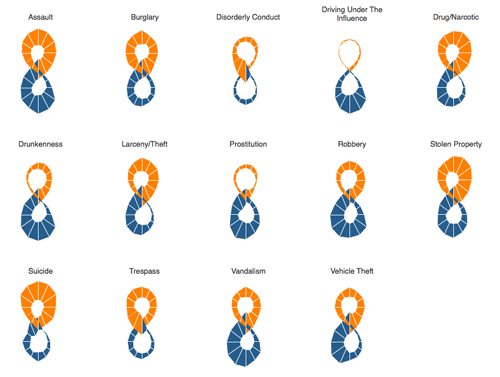 I’m not very happy with this chart in terms of the viewer’s ability to accurately read the chart. I also don’t think it highlights changes between hours enough. Often there are changes and trends that are easy to spot in the linear charts of my last post, but that are very difficult to see in these charts. Each hour is at quite a different angle than the hours on either side, which makes it difficult to compare two hours. You still get the big picture trends, like if a crime is a night-time or day-time crime, but the smaller trends are much harder to spot.

On the flip side, I really like the metaphors of the infinity symbol and the hourglass. On an artistic and philosophical level I think those metaphors make this a really beautiful visualization. Too bad it’s not also effective 🙂

17 thoughts on “Visualizing Time with the Infinity Hour Chart”