Tom Ortega and John Wilker, who organize the kick ass 360|Flex conference, are teaming of with Joshua Cyr, who organized the first RIAdventure cruise. They’re planning a new event that will be a 7-day cruise that features a 2-day conference. The cruise, called RIAdventure 360, is going to leave from New Orleans and hit Mexico, Guatemala, and Belize.

The speakers are required to prepare new content specifically for RIAdventure 360. That means no canned presentations that you saw 5 times already at past MAX conferences. The content has to be fresh, it has to be cutting edge, and it has to be made specifically for this event. This requirement is awesome. I think that all presenters at all conferences should prepare fresh content every time. Sure, it’s more work, but if you can’t prepare fresh shit for a conference then you should present less often. But of course that’s just a personal opinion with no disrespect meant to anyone on the speaker circuit 🙂

The speakers for this fine event will be: Ted Patrick, Ryan Stewart, Faisal Abid, Samuel Rivello, and… me! 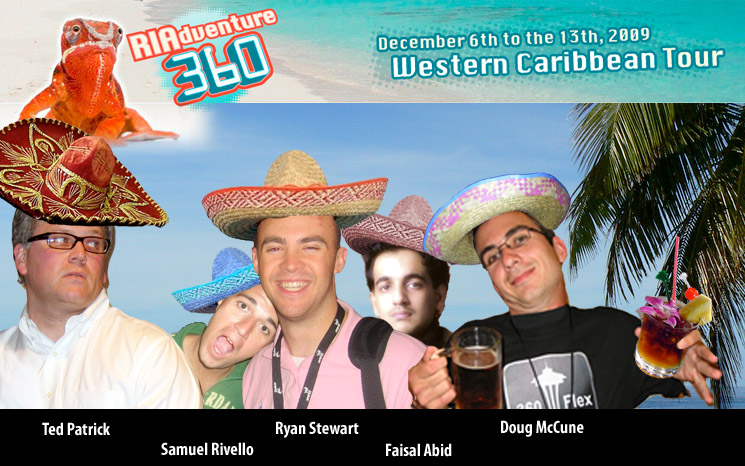 Focus on the future of RIA

This is a conference about the future, not the present. I’ve been formulating some ideas about what I’d like to present, but I haven’t quite solidified my plan yet (hell, if the conference is about the future I can’t plan it too far ahead, everything will change!). I’m currently playing with some ideas about the future of data visualization in application development. We’re reaching the point where data storage and bandwidth have reached levels capable of transmitting massive data sets, but we haven’t yet understood the implications this has for application developers. What if you had access to the location data of all the cell phones in the country? Or your entire genome? Or the record of every dollar ever spent by the government? The data is coming soon (much of it is here already), but if we, as RIA developers, don’t have the skills necessary to make sense of it all we’ll miss the opportunities to truly innovate and impact the world.

And of course this is a cruise after all! We’re going to be partying it up like it’s nobody’s business. The conference also includes dinner discussions about our industry, which I think roughly translates to getting Ryan and Ted drunk enough to spill some Adobe secrets.

And if all that wasn’t enough Tom and John are also throwing in a 2-for-1 deal. If you sign up for RIAdventure you also get a free ticket to the next 360|Flex in February. So if you want to have a hell of a good time while geeking out, go sign up for the RIAdventure cruise.

3 thoughts on “Let’s go on a cruise! RIAdventure is going to be sweet”