One of the recent projects I have been working on with a team at Universal Mind is the MapMyPix AIR application that allows you to take data from a handheld GPS device and mash that together with pictures from a digital camera and automatically geocode your photos.

What it does
You drop a GPX file (which is what you get from your GPS device) onto the application and it shows your route. Then you drop a bunch of pictures onto the route and it automatically analyzes your pictures and figures out where along the route they were taken. Now you’ve got a geocoded photo set that you can view on the map and upload to Flickr to share. When the photoset is uploaded to Flickr the geocoded data is uploaded as well, so you can view your photos on a map. You can share the uploaded photoset with other people by sending out a link, or you can embed your mapped photos in a blog post or web page. 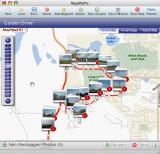 Who this is for
Primarily this application is for someone who has a handheld GPS device and likes taking pictures on hikes, or ski trips, or other outdoor activities. The application also has broader implications in the business realm where large sets of photos need to be combined with GPS data (scenarios like real estate brokers, insurance investigators, etc come to mind). If you’re a backpacker and you take pictures along a hike and you carry a GPS device, then this app is right up your alley.

If you don’t have a GPS device you can still use the application to geocode and upload your photos. You can manually drag individual photos to set their geo locations. Further enhancements to the application are in the works to make the application more friendly to people without GPS devices, since for this initial release we were really focusing on users who have GPS data. 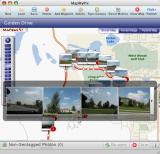 Why this is cool
There are other ways to geocode your pictures. Flickr allows you to geocode pictures that you’ve already uploaded. But the process involves dragging each individual picture onto a location on the map. When you’ve got a hundred pictures from a hike you took this is painful. Not to mention that you’ve got to upload your photos first from your computer, then do all this manual gecoding one by one after the photos are online. Lame.

With MapMyPix we’ve combined the geocoding and uploading process into a smooth interface. Since this is an AIR app you get all the slick mapping capabilities that you can get with a Flex app. And since it’s a desktop application we allow you to simply drag a whole folder full of hundreds of images straight from your computer onto the map and boom, they get geocoded. Sweet. 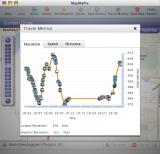 Some technical details
The app is a Flex application using the MapQuest AS3 API. Universal Mind made the MapQuest AS3 API (you can read the businessy sounding case study here). I’ve worked with both the ESRI AS3 API and the MapQuest API. Without making any comparisons I will say that the MapQuest API is great to work with. It’s fast, simple, and does everything I’d expect a map API to do (I’m not trying to kiss ass here, it actually is a very solid API).

The core application is a desktop AIR app. However, we also used almost entirely the same code base to create an online viewer application that is used to display photosets once they’ve been uploaded. After a photoset is uploaded we provide a unique URL and embeddable code that uses a Flex application to display the images on a map for sharing. Since the whole thing is a Flex app it took almost no work to spin off the online viewer after we had made the AIR desktop version.

Where we had issues 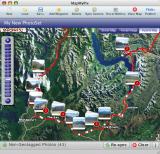 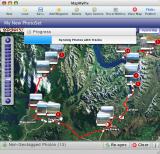 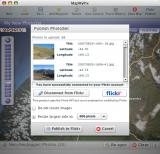 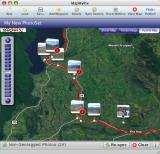 And here’s an example of an embedded MapMyPix geocoded photoset that was uploaded using the app:

12 thoughts on “What I’ve been working on: MapMyPix”