Why the hell did I figure this out? Well, I was preparing for my presentation about extending the Flex framework with custom components for tomorrow’s silvafug meeting, and I got curious just how much code there really was in the Flex Framework. If you’ve ever dug into the source code for the framework you know that there’s a lot there, dig deep enough and you’ll find some monster classes that must have taken a bazillion man-hours to write.

The totals above include every .as and .mxml file that is published in the SDK source. There are some classes that are intrinsic classes in the Flash Player, which were not written in Actionscript, and these are obviously not included in the count. Also not included are the Apollo component source files (in case you’re curious that’s another 9,100 lines of code).

I’ve put together an Apollo app that will scan the Flex SDK source directory and tell you these stats, along with breakdowns by class, so you can see wonderfully interesting things like how many private functions each class includes, or how many lines of whitespace are in each file. I’ll be releasing the Apollo app shortly that you can run on your own code. God knows why you’d want to. I guess this is what happens when I get curious, I make useless pieces of software. Woot woot.

Here’s a little screenshot of the Apollo app in action: 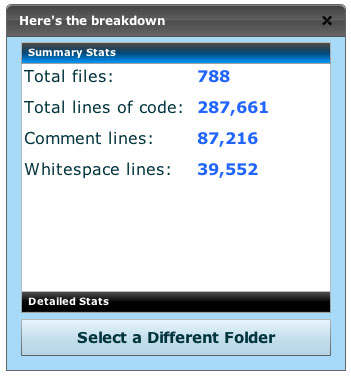